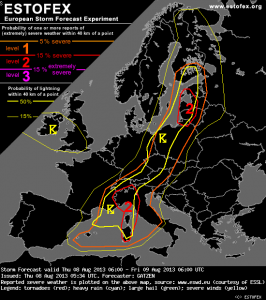 A level 2 was issued for north-western Italy and surroundings, Corsica and Sardinia mainly for large or very large hail, severe wind gusts, and tornadoes.

A level 1 was issued for most of the Alps, Czech Republic, Poland and suroundings mainly for large or very large hail and severe wind gusts.

The west European long-wave trough forms a closed centre that moves across southern France and the north-west Mediterranean Sea today. The northern part of the long-wave trough moves as a lifting trough into Scandinavia and weakens. DAVA is expected in between these features across most of France and Germany, leading to a weak ridge. At 850 hPa, a plume of hot air remains across the Balkans and spreads northward into the Baltic States. Cold air advection will affect the west and central Mediterranean in the wake of a cold front.

Together with the southern part of the trough, a cold front moves south-east today. Ahead of the cold front, a hot and dry air mass is situated, and some little CAPE is strongly capped. Better moisture is situated along the cold front and especially across northern Italy today where current soundings indicate large CAPE in excess of 3 KJ (Milano) due to very steep lapse rates in the hot air mass.

In the morning, an MCS moves eastward to the north of the Balearic Islands. Current thinking is that this system will move eastwards until the noon hours and will likely weaken given the strong capping inversion. However, new convection is possible along its outflow boundary that transports moisture eastward. Best potential of new development is expected across the Islands of Corsica and Sardinia, where diurnal convergence overlaps with the increasing CAPE. Due to very strong vertical wind shear exceeding 30 m/s in the lowest 6 and 20 ms in the lowest 3 km, multicells and supercells are expected, capable of producing very large hail and severe wind gusts. Excessive precipitation is also possible as well as tornadoes due to strong low-level vertical wind shear in the vicinity o the outflow-boundary/cold front. Main limiting factor will be the strong cap that can only erode locally.

In the wake of this system, cold air advection will be dominating. Weak low-level convergence will limit the thunderstorm potential. However, given the increasing moisture and relatively steep lapse rates remaining for a while, a few storms are not ruled out. Weakening vertical wind shear from the west will limit the severe potential during the afternoon hours.

Northern and central Italy will likely also be affected by thunderstorms today. In the north, higher coverage id expected due to better moisture and weaker capping. However, a few storms are also forecast further south. Due to the strong vertical wind shear, every storm that forms will rapidly organize capable o producing large or very large hail and severe wind gusts. Uncertainty o storm coverage and initiation is the reason to issue a level 1 threat.

Central Alps to the Baltic States

Underneath the strong mid-level jet, an overlap of steep lapse rates and increasing moisture behind the cold front is forecast. Given cold air advection and mid-level DAVA, initiation is questionable. However, every storm that forms due to orographic support will have a high potential to organize, and very large hail and severe wind gusts are possible.

Higher coverage of storms is forecast over the Baltic States, where weaker vertical wind shear is present. However, severe storms and large hail/severe gusts are also well possible there.