A cut-off low has formed over Central Mediterranean with strong PVA at the upper-levels. Near the surface, a wide cyclonic vortex develops, with multiple eddies on its periphery, complicating the low-level wind field. For the next three days, this baroclinic cyclone will stay almost stationary over South Italy resulting in DMC events. In Central Europe, a high-pressure system is established, providing stable conditions with low level inversions and weak winds. A short-wave trough will cross North Germany, Poland and Baltic Sea which will provide some lift, but instability is almost absent. Another wave will reach the west coasts of Scandinavia, bringing a polar air mass from NW and some long-lasting non-convective downpours are expected in Norway where scattered lightnings may appear above the sea as GFS predicts some instability and low-topped storm cells. Moreover, a short-wave trough over Russia and its associated cyclone near the surface will bring some gusty non-convective wind gusts and snowfall, quickly shifting to NE by tomorrow night.

As the cut-off low stays almost stationary over the Tyrrhenian Sea, a jet stream is wrapped around the vortex increasing the DLS on its periphery. On Tuesday, the steepest lapse rates are found over the south part of the system, in Tunisia and Mezzogiorno (South Italy) and during the early morning of Wednesday, they will be shifted to SW Balkans (Greece and Albania). Under these areas large hail is expected near the coasts due to high (fat) CAPE, overlapping with strong DLS and large amounts of small hail more to the inland areas, where CAPE profiles seem more vertically distributed and freezing level is as low as 2000-2400m.
In addition, during the morning of Tuesday, convective wind gusts may affect Corsica and Tunisia, as a 850 hPa jet streak is expected, embedded in the convective phenomena.
The greatest thread throughout this convective outlook, will be excessive precipitation in E Italy due to strong Bora winds over Adriatic Sea, bringing unstable air masses over Italy. Saturated profiles in the models outputs suggest that this area may receive more than 200mm of rainfall in 24 hours, partly convective. SE extreme parts of Albania and islands of the Ionian Sea may also receive high accumulated rainfall due to training convection during the night of Tuesday and Wednesday morning. Another place of interest for flash floods due to a convergence zone seen in GFS and ECMWF, is found in NW Aegean Sea on Wednesday morning. Very moist air masses over Greece and orographically induced convection increase the threat level for heavy convetive rainfall.
Finally, this cold air bubble over warm Mediterranean Sea (SST 20-21C), is expected to create a favorable environment for waterspouts and tornadoes. Tornado threat is maximized in SE Italy, where SREH and veering winds will be present. Waterspouts are expected in South Adriatic, Tyrrhenian and Ionian Seas, as well as near the coasts of Tunisia and Algeria.

Possible Medicane at the end of this week: NWP models suggest the development of a tropical-like cyclone by the end of this week in Central Mediterranean. The current scenario shows the formation of a warm seclusion south of Sicily on Wednesday due to widespread thunderstorm activity near the cold core low which will warm the mid/upper-levels, resulting in upper-level divergence. Baroclinic instability hardly plays any role to the formation of such systems, so there are important uncertainties in the model outputs regarding latent heat release through deep convection and sea surface. One can also notice the decrease of vertical wind shear after Wednesday, which may also play an important role to the development of a symmetric warm core cyclone. The following forecasters will monitor the situation and we will publish MDs if needed. 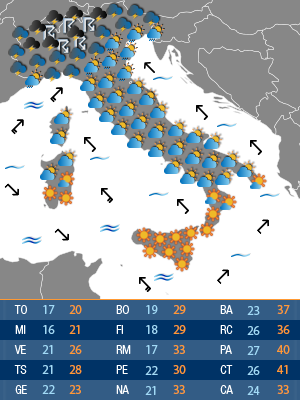 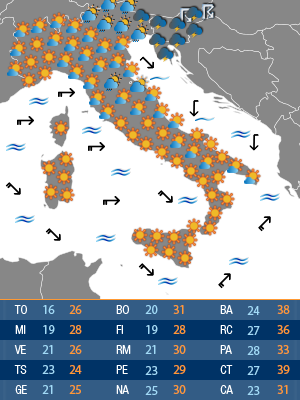 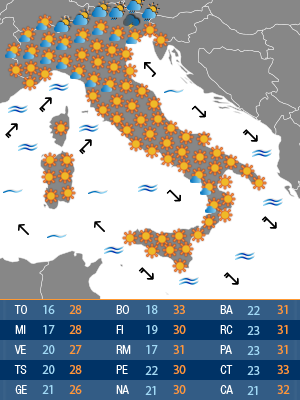