A powerful, autumn-like cyclone near Iceland governs the weather in Northwestern Europe. A secondary low forms in the wake of the Scandinavian mountains and grows deep enough to induce a new cut-off process over Southern Sweden till the end of the forecast period. Its cold front enters Poland, Germany, the Benelux countries and Northern France, while the British Isles get overspread by strong warm air advection again in the second half of the forecast period.
Otherwise, weak gradients with a weak Northwesterly flow and seasonable temperatures prevail over Europe. The remnants of an upper-level low slowly travels eastward across the Mediterranean, with a moderate 500 hPa speed maximum ahead of it from Tunisia towards Greece.

The series of severe thunderstorm days over the Southern Mediterranean goes to the next round on Saturday, though the area of highest risk starts to slip out of our forecast domain. Abundant low-level moisture beneath a Saharan elevated mixed layer continues to create CAPE in excess of 2000 J/kg in an environment of 20-30 m/s deep layer shear ahead of a diffuse, slowly southeastward moving cold front. Rising motions in response to shallow wave developments along this front and patches of vorticity aloft help to weaken the cap and allow isolated to scattered convective initiation.
Early in the forecast period, it is likely that a huge MCS will be ongoing in the sea area between Tunisia and Sicily and will cross Sicily from West to East in the late morning to early afternoon hours. Further convection will then initiate over the mountains of Northeastern Algeria and Northern Tunisia, as well as along an outflow boundary which spreads south- to southwestward from the Sicilian system and pumps rich Mediterranean moisture quite deeply into Tunisia.
A quick storm organization into supercells can be expected, and some of them may grow upscale into new MCSes. They will possibly concentrate around Malta late in the frecast period. A level 2 was issued for all kinds of severe weather: large to very large hail, severe wind gusts, tornadoes and extreme precipitation amounts which could well cause life-threatening flash floods over land, especially in Sicily.

With a gradual decrease of low-level moisture, steepness of the lapse rates and strength of the vertical wind shear towards the Northwest, the severe weather risk decreases on the “cool” side of the boundary. However, scattered storms in Sardegna, over the Tyrrhenian Sea and late in the forecast period again in Sicily still suffice for a level 1.

With roughly moist-isentropic lapse rates in the warm sector of the Swedish low, some better low-level moisture may create low-end CAPE, in particular near the warm front (Southern Finland, Estonia) and then again near the cold front (Southern Sweden into Central Germany). Isolated storms are possible, probably becoming elevated after sunset, but severe weather is unlikely due to limited instability release and weak vertical wind shear. 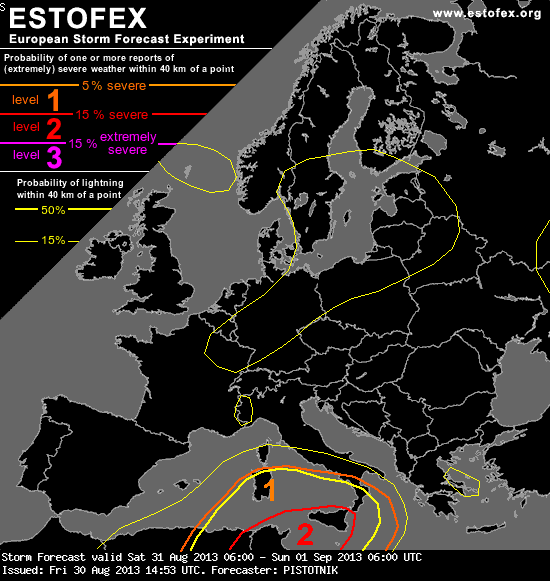