A level 2 was issued for S-France, parts of Italy, Corsica and Sardinia for excessive rain, large to very large hail, severe to damaging wind gusts and tornadoes. Significant events are well possible.

A level 2 was issued for far W-Sicily for similar hazards compared to the first level 2.

A pronounced cyclonic vortex is situated southwest of Ireland. An intense 40 m/s mid-level jet rounds the base of that vortex and helps to push it a bit more to the southsoutheast. A large-scale upper trough over the Iberian Peninsula and France is about to get absorbed by that approaching vortex and starts to shift to the NE – towards E-CNTRL France, maybe also all the way to Belgium.
Downstream ridge strengthens due to impressive deep WAA and its axis becomes established from the Ionian Sea to Hungary.
Another cyclonic vortex over far E/NE-Europe sustains the advection of a cold and rather dry air mass far south to the Black Sea with 850 hPa temperatures dropping to well below zero degree celsius.
No major changes occur with the pressure distribution near the surface. An intense high pressure area over NE Europe expands all the way to W-Turkey in response to ongoing CAA. An extensive low pressure area is situated SW of Ireland with another weak/transient low pressure center over the far W-Mediterranean. In general, falling surface pressure over the W-Mediterranean and rising pressure over the E-Balkan States assists in an intensifying pressure gradient over the CNTRL Mediterranean. A broad belt of intense southerly winds evolves and it advects a very moist air mass north towards SE France and Italy. This will be the main region where organized convection can be expected.

As the upper low over the far W-Mediterranean swings to the NE, it acquires a more negative tilt as it approaches the area of interest. A 40 m/s 300 hPa jet translates north and exits the highlighted area during the late afternoon hours to the north. This places most of the area of the CNTRL Mediterranean beneath its right entrance region. This combined with the gently northward shifting upper trough results in a prolonged period of strong lift.

As mentioned in the SYNOPSIS part, a broad belt of strong southerly winds becomes established over the CNTRL Mediterranean. 0-6 km shear exceeds 20 m/s over a vast region and approaches 30 m/s ahead of the cold front and near the Alps. Outstanding values of 15- 30 m/s 0-3 km shear are also forecast, which reflects the strength of the near boundary layer flow. SRH is also augmented but mainly within the capped air mass. Nevertheless, some overlap exists especially over SE France and N-Italy.

The strong low-level winds advect a very moist air mass north with 0-500 m mixed-layer mixing ratios of 10-15 g/kg. At the same time, one of the most robust EML plumes of this year advects N/NE and overspreads the very moist BL air mass. This results in widespread 1000-2000 J/kg MLCAPE with ICAPE values well in excess of 3000 J/kg over the Ligurian Sea.

Combining all those parameters points to a very dangerous setup for the level 2 region !

Widespread convection is expected to affect a region from far NE Spain to Corsica and N-CNTRL Italy already at 06 UTC onwards. At that time, substantial directional shear still exists along the S/SE coast of France to Corsica and far NW Italy with SRH-1 and 3 km values in excess of 400 m^2/s^2. Although this activity should mostly be elevated in nature, a few surface based events near the coast, especially offshore and next to Corsica are well possible. Tornadic supercells with large hail, severe to damaging wind gusts and torrential rain are forecast. This risk continues until roughly 12 UTC, when directional shear weakens a bit. Beside the risk of surface based activity, organized elevated thunderstorms pose a risk of isolated large hail more inland but most likely a substantially excessive rainfall risk along all of the S-coast of France and NW Italy. Temporal training may push 24-h rainfall amounts in the 100-200 l/qm range with regionally higher peaks not ruled out! Dangerous flash flooding is forecast!

By that time, a deep convergence zone becomes established over the Ligurian Sea and a powerful V-shaped MCS will rapidly evolve and affect Corsica, Sardinia and NW-Italy during the rest of the forecast. A slow eastward progression of that cluster is forecast which could lower the risk of extreme rainfall amounts a bit. Nevertheless, two foci exist for serious flash flood producing convection:

One over Corsica/Sardinia and the NW-coast of Italy, where 150-300 l/qm rain can be expected within 24h. In case of temporal training of that MCS, regionally even more extreme QPF amounts are possible. Be aware of life-threatening flash flooding! In addition, tail-end or more discrete storms grow in a very favorable environment for rotating updrafts and large/very large hail, excessive rain, damaging winds or tornadoes are all possible.

The second region extends from S-Switzerland to SW-Austria and N-Italy, as moisture loaden flow is forced upward along the Alps beneath the right entrance of the upper-level jet. Embedded thunderstorms will regionally enhance the excessive rainfall and flash flood risk.

During the end of the forecast, isolated convection may also fire over Sicily and S-Italy as the cold front approaches from the west. Timing of that front remains still a bit uncertain, so we just added parts of Sicily into a level 2 to cover that risk. All kind of severe would be possible like very large hail, damaging wind gusts, excessive rain and tornadoes. Low lightning probabilities indicate a low confidence of more widespread activity but a supercell or two can’t be ruled out. 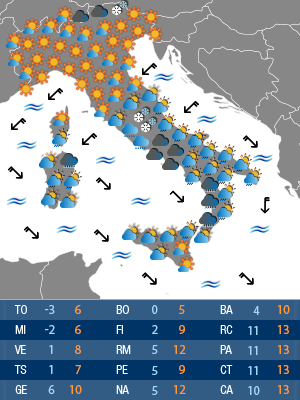 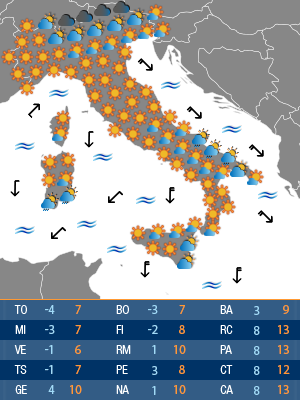 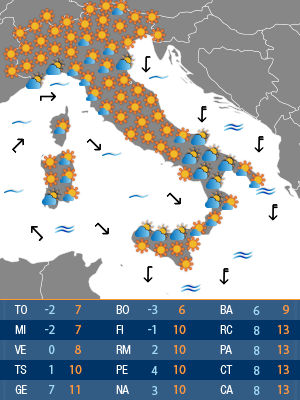