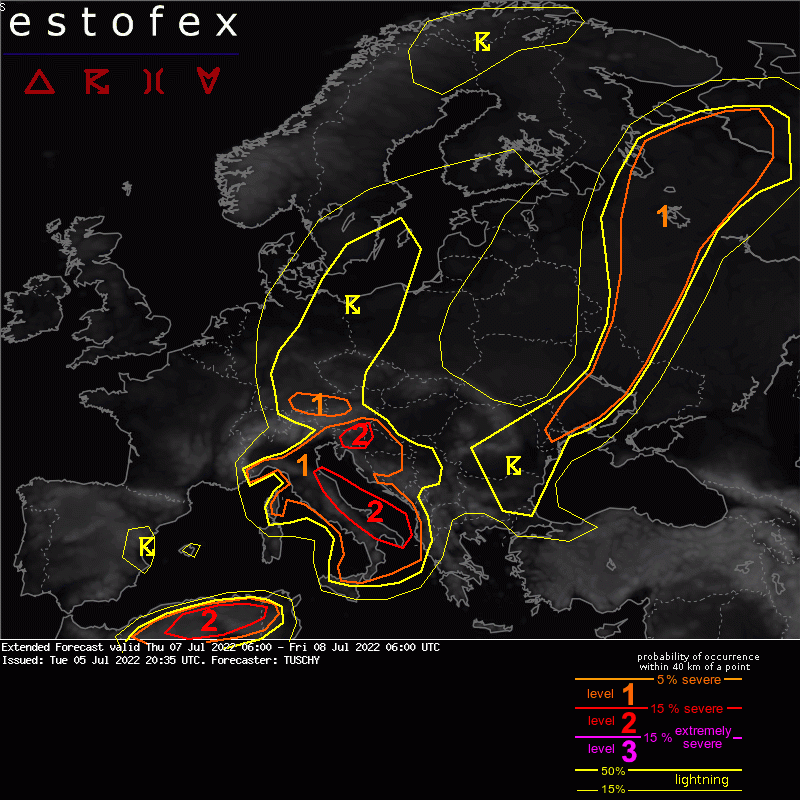 A level 2 was issued for large hail (isolated very large hail) and severe wind gusts for Slovenia into Croatia.

A level 2 was issued for E Italy into the Adriatic Sea for large to very large hail, severe wind gusts and a tornado risk.

A level 2 was issued for very large hail and damaging wind gusts for parts of N Algeria and NW Tunisia.

Level 1 areas surround all level 2s with similar hazards but a lower coverage. An isoalted tornado risk exists over Slovenia.

A level 1 was issued for W Russia into Moldova mainly for hail and severe wind gusts. A tornado risk exists in the northern part of the level 1.

A quasi-stationary wave pattern continues over Europe with an impressive positive geopotential height anomaly parked over NW Europe with 500 hPa height percentiles in the near record territory. Another although weaker ridge resides over far W Russia.
In-between, a diving trough affects most of CNTRL Europe and crosses the Alps during the overnight hours before entering the N Balkan States during the end of the forecast period. This trough is accompanied by an impressive thermal gradient at mid/upper levels, pushing gradient winds at the upper troposphere also near record levels for this time of year (300 hPa wind in excess of 110 kn or 55 m/s).

Attached to this trough is a dissolving low tropospheric vortex during its approach on NW Poland (evening hours), which is highlighted by a rapid member spread in IFS-ENS data. This tracker indicates another vortex trying to spin up over the N Adriatic Sea but marginal pressure drop and large member spread preclude any fine tuning for now. Still, many members try to spin up a vortex along the E Ialian coast during the overnight hours.

A progressive cold front races S as it merges with a weakening prefrontal occlusion. This frontal conglomerate approaches the Alps until 00Z and the NE Adriatic Sea/Bosnia and Herzegovina until 06Z.

NWP guidance is rather stable with all models indicating this southward moving trough. However some geometric discrepancies (ICON broader compared to GFS with GFS trending sharper during the past 4 runs) and speed differences still exist which could change timing for convection S of the Alps a bit. Overall this should not impact our expectations of organized convection during this forecast.

… Parts of Germany into Czechia and Austria …

A diffuse warm sector covers most of Germany during the daytime hours and is framed by a weakening warm and a structuring cold front. Numerous lines of enhanced convective activity cross this area to the S/SE within 10-25 m/s DLS (increasing rapidly from E to W). 0-3 km shear remains weak most of the time so marginal hail/strong wind gusts will be the main issue.

One area of interest evolves over S Bavaria into Austria, where low-tropospheric flow converges ahead of the Alps with a LL mixing ratio increase and 0-3 km shear values in the 15 m/s range. A few severe wind gusts cannot be ruled out with strong updraft moving into up to 600 J/kg MUCAPE and a marginal level 1 was added but also there exists a low-end tornado risk, too with good SRH signals in the lowest 1km and 3km layers.

… S Austria into Slovenia and Italy …

Beyond noon, CI is forecast along the S fringes of the Alps with convection moving into an unstable air mass with 500 – 1000 J/kg MLCAPE (locally up to 1500 J/kg) forecast from N Italy into Slovenia as an Alpine EML fans out over the marine air mass S of the Alps. DSL in the 15-20 m/s range with long/straight hodographs indicate a chance for well organized multicells / a few supercells with the latter risk increasing during splitting storm events. Large hail (isolated very large), strong to severe wind gusts and locally heavy rain will be the main hazard. An isolated tornado risk is possible with the convection exiting Austria into Slovenia, where LCLs remain lower. This activity clusters betimes and grows upscale into a progressive bow/MCS event, which affects Croatia and Bosnia and Herzegovina during the overnight hours with a gradually lowering severe risk as CAPE decays.

Further W convection enters a substantial drier air mass over NE Italy with LCL readings in the 1-1.5 km range, so severe/damaging wind gusts become the main hazard with this activity, which builds S into an increasingly unstable air mass along the Adriatic coast (1000-2000 J/kg MLCAPE).

During the late evening into the overnight hours, convection enters the N Adriatic Sea during the time as the cold front approaches from the NE. If this indeed occurs as anticipated, a severe MCS could evolve either from this activity or from orographic convection over CNTRL Italy. Thunderstorms ride S along the E coast of Italy with large hail and severe/damaging wind gusts. In addition any discrete cell or tail-end charlie could pose a tornado threat with rather low LCLs and with expected modified BL wind field along the coastal areas. This expanding MCS races S over most of the E/SE coast of Italy including the CNTRL/S Adriatic Sea, also affecting S Italy during the end of the forecast. More discrete activity is possible over the SE Tyrrhenian Sea (all hazards possible including a tornado event and very large hail).

A level 2 was issued for Slovenia with good confidence in organized DMC activity within NW-erly flow regime. This level 2 may be modified and expanded S, depending on how far S the CAPE field expands.

A level 2 was added for the E coast of Italy into the Adriatic Sea but this level 2 area may be expanded all the way into SW Italy if confidence in scattared CI increases that far to the SW.

Scattered to widespread CI is forecast along a quasi-stationary front with DLS in the 15 m/s range. Organized multicells bring large hail and strong to severe wind gusts before upscale growth into clustering convection with heavy rain occurs. An isolated tornado event is possible within the N fringes of the level 1, where LL shear is enhanced (along the tip of a N-ward pushing wave along that synoptic-scale boundary).

Numerous high based thunderstorms erupt along the Atlas Mountains ahead of an upper trough over the SW Mediterranean. Onshore flow advects rich BL moisture along the mountains, where steep lapse rates exists with MUCAPE build-up in the 2-2.5 kJ/kg range. 15 m/s DLS with LCL aoa 1.5 – 2 km AGL and very steep LL lapse rates point to damaging downbursts and large to giant hail with this activity. With good QPF ensemble support, an upgrade to a level 2 was performed.